Have you ever had any complaints or grievances filed against you? Have you ever been disciplined by the Florida Bar or the bar of any other state? If so, please explain:

She FAILED TO DISCLOSE THE GRIEVANCE & COMPLAINTS WE FILED AGAINST HER IN 2019.

-3 Complaints we flled with the Judical Qualifications Commission regarding:

*Judge Stephens violating my rights; failed to allow me testify by about the violent crimes while protecting an ILLEGAL ALIEN, FELON, REPEAT WOMEN ABUSER w 3 DUI's The same info shared in another trial with Judge Barry Cohen led to a jury conviction against the same perp.

*Judge Stephens DISCLOSED MY SAFETY PLAN TO CONVICTED VIOLENT PERP. TOLD HIM WE WERE MOVING, CAUSING HIM TO BECOME ENRAGED. THEN SHE RELEASED HIM THE NEXT DAY-AFTER PLEADING GUILTY TO 5 NO CONTACT ORDERS. BC HE STALKED ME FROM JAIL! JUDGE STEPHENS DISCLOSURE PUT OUR LIVES IN DANGER & INCITED A VIOLENT PERP WHO CAME OUT OF JAIL ENRAGED! 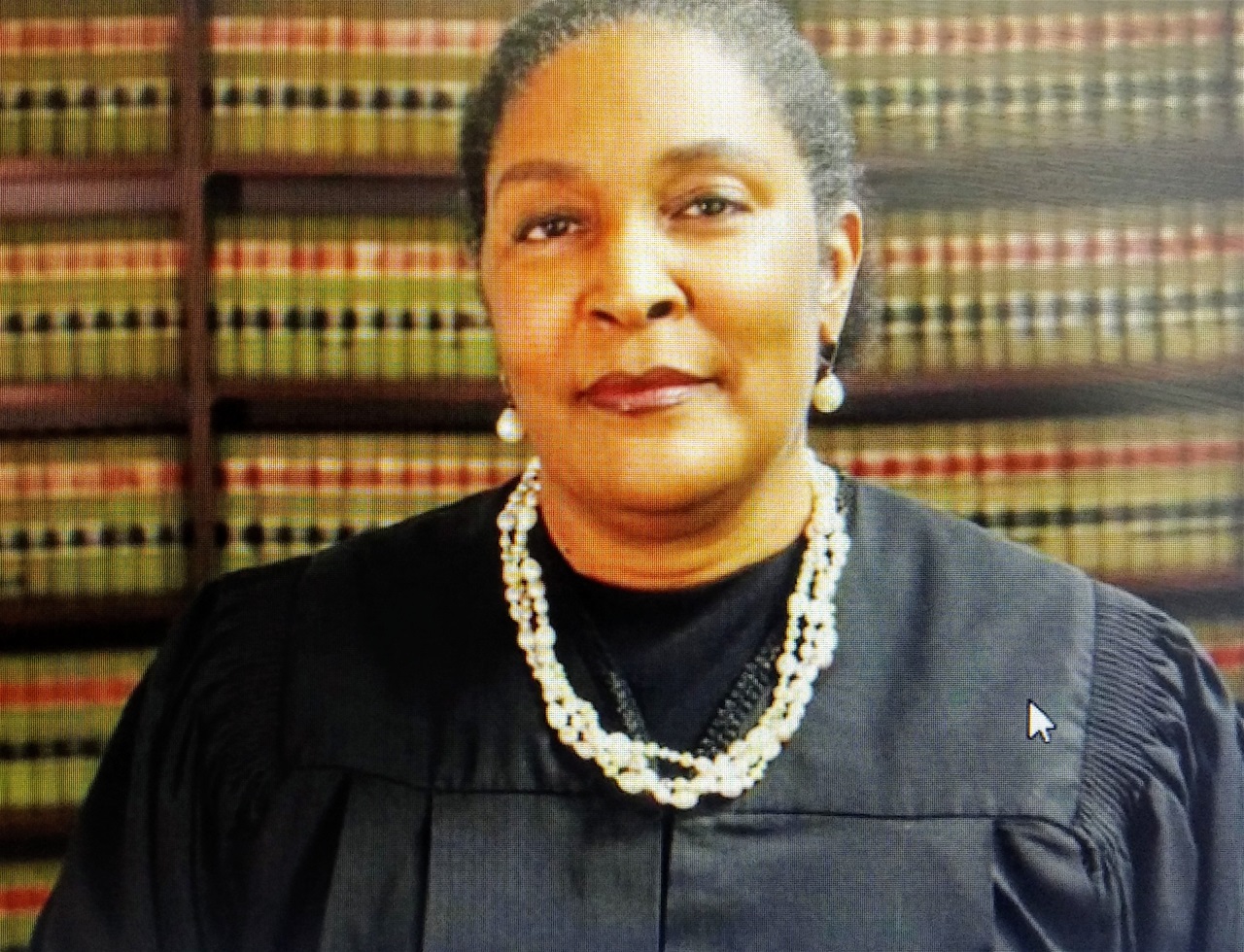 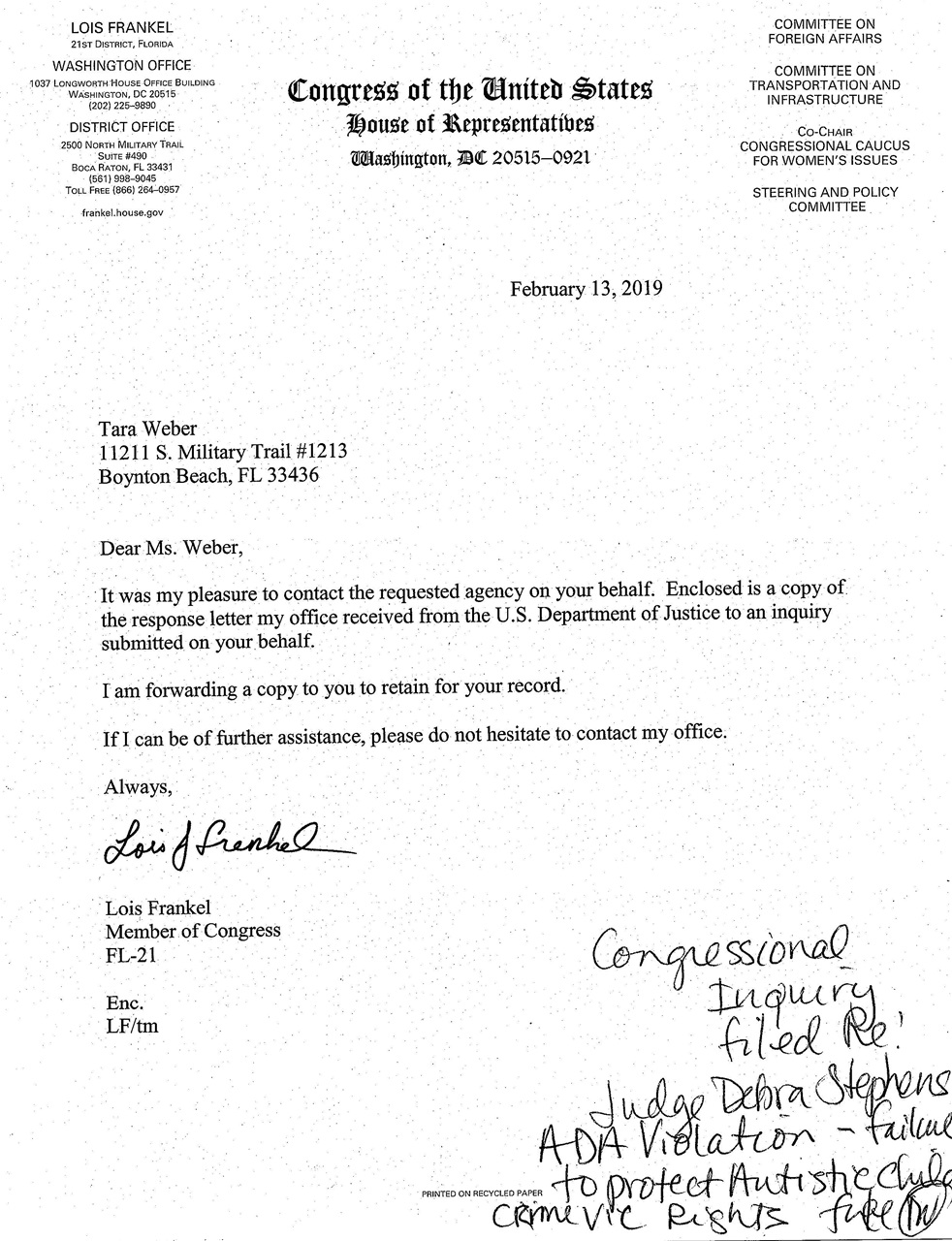 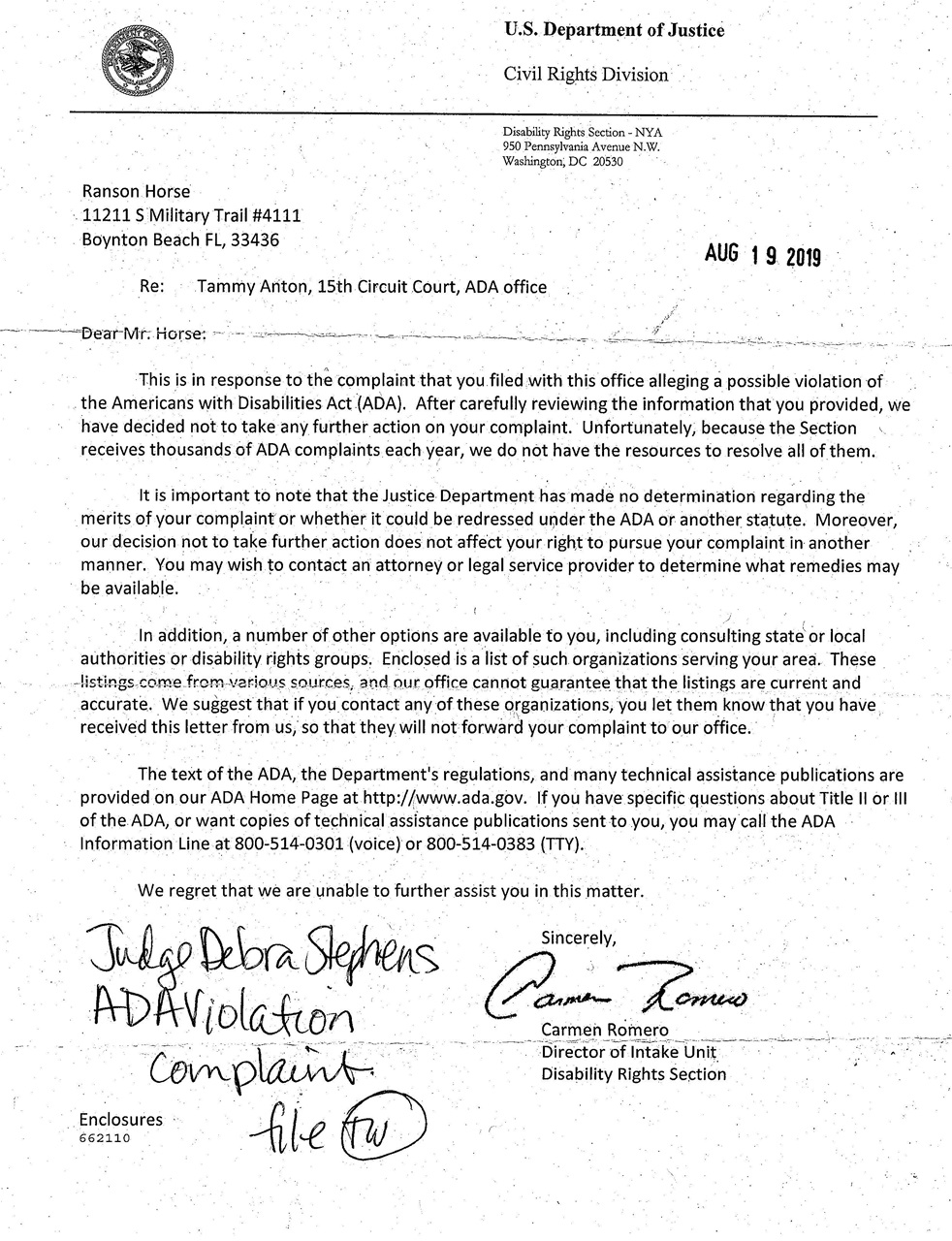 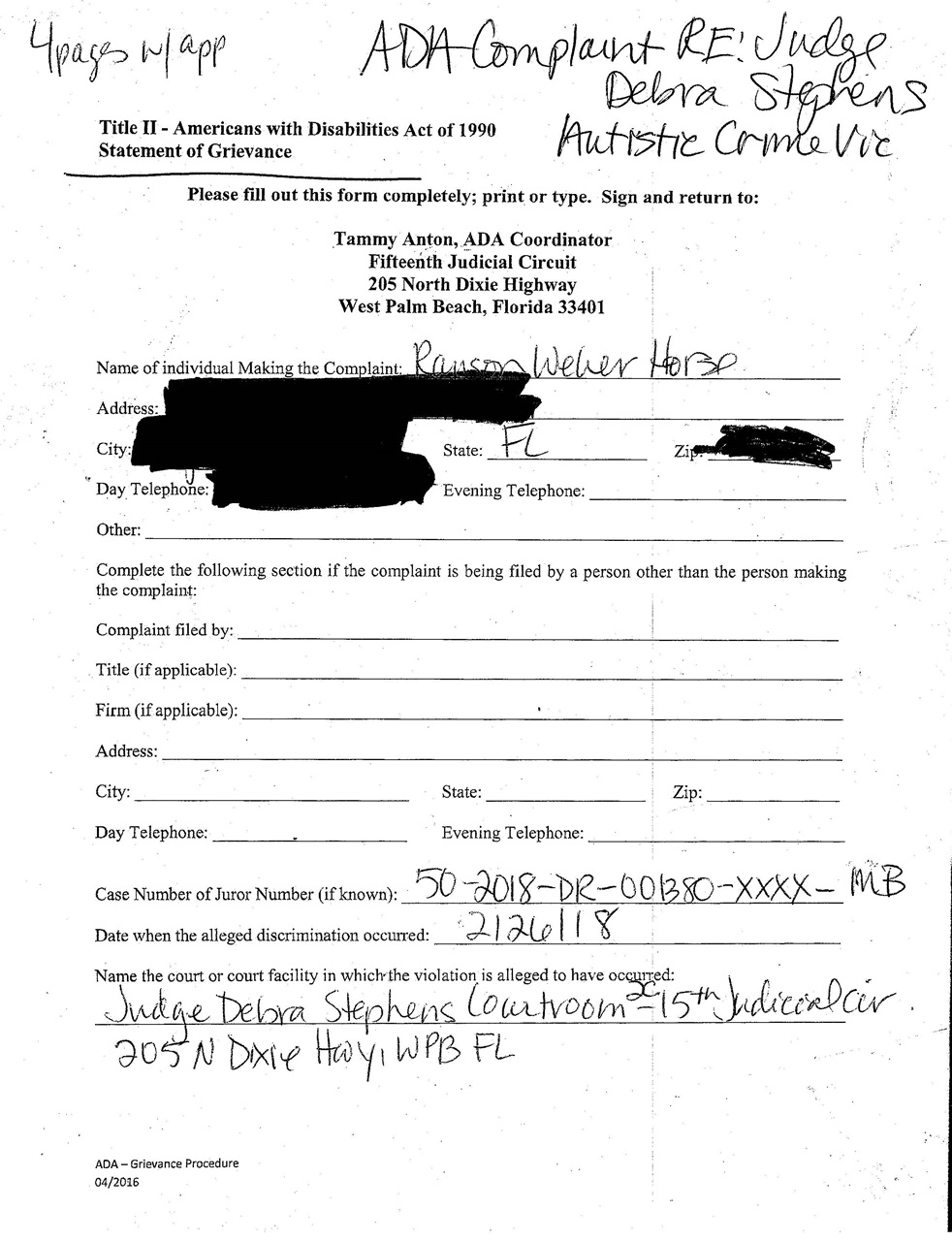 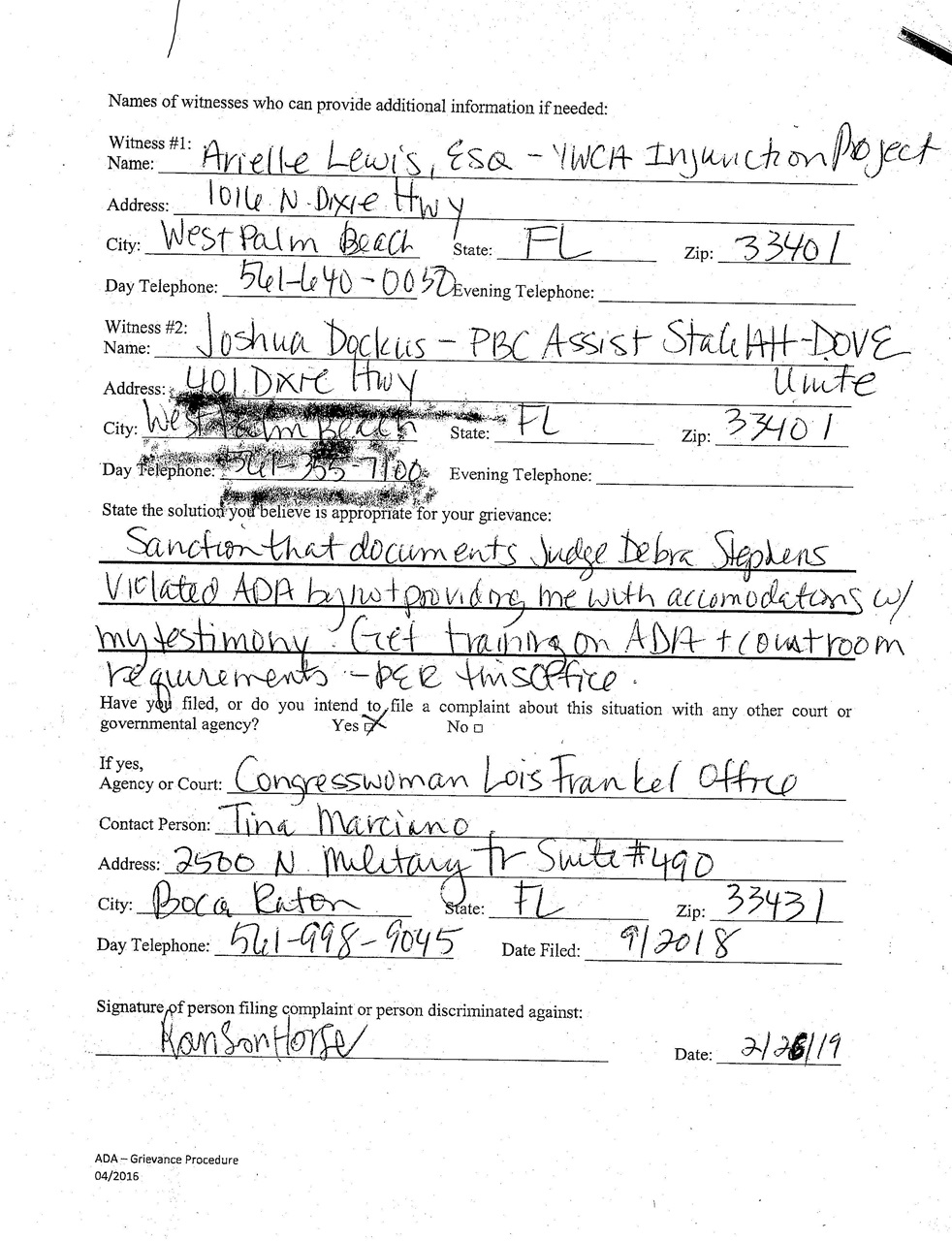 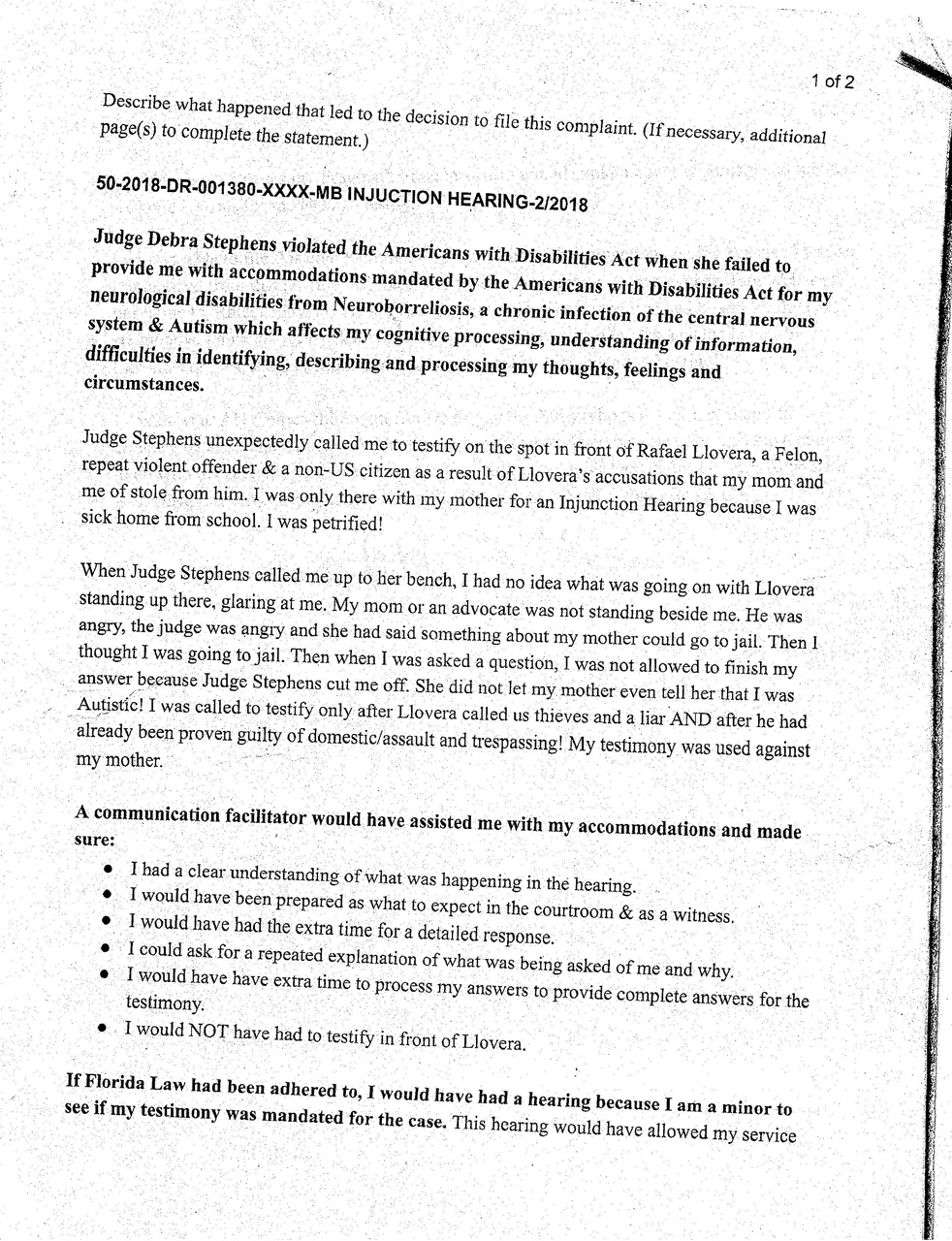 Judge Stephens violated my son's civil rights, victims rights & Americans with Disabilities by forcing him to testify without a supeona, a hearing to determine if a minor must testify-Florida law!

On 2/26/2018 I attended an Injunction hearing in Judge Debra Stephens courtroom in Palm Beach Co. with my son, Ranson Weber Horse. He was ONLY there because I did not want him home alone sick. The judge’s decisions and courtroom behavior was shocking, abusive and she not only did not protect my disabled child from his violent adult offender.

*She also revictimized him by humiliating, confusing him in front of the entire courtroom by forcing him up to testify without a subpoena, accommodations or instruction for the benefit of Llovera as well as failed to protect my disabled child after Llovera was found guilty of battery & trespassing by a jury and agreed to the five year Injunction. The minute after the Injunction was in place that Llovera agreed to, Judge Stephens asked Llovera if he had anything to say. Llovera went on a rant and complained about his work belongings I had, called me a “thief’ and a “liar.’

Rather then violating the new Injunction, Judge Stevens allowed a non-U.S. citizen, an alcoholic FELON with a violent history in Florida to violate her own Injunction-when he already had an active Injunction from Broward Co because he is a repeat woman beater. (See PBC State’s Attorney, supplemental discovery, documents what he said during the hearing that she did not stop.)

Judge Stephens then allowed, Llovera to accuse my son of stealing from him. Rather than violate him for the name calling, she demanded my son up to her bench immediately to testify, not allowing me to stand by him. Or have an advocate stand by him. (a victim’s rights violation) HE WAS PETRIFIED! Judge Stephens forced, my son, Ranson Weber Horse 15 at the time, a traumatized Autistic child to testify on the SPOT in front of the violent man who beat his mother and invaded their home, repeatedly, was now permitted by Judge Stephens to glare at him.

This was horrifying, ludacris, traumatizing and dangerous to our family. Then when my attorney, Arielle Lewis informed the Judge my son was Autistic, Judge Stephens became explosive toward Arielle and yelled at her, “Counselor, DON’T GO THERE! I saw it.” Why would she be so angry? Stephens is the one that forced a child to testify against his own mother to benefit a convicted batterer who is not an citizen and has a low level of asylum because he is a Felon who served 5 years in Florida prison. Ranson was petrified and had no idea what was happening. He thought his mother and he were going to jail, the way Judge Stephens was yelling at my mother and her attorney, Arielle Lewis.

The worst possible thing the system can do to a child of violence is have them questioned in front of the violent perp. This is basic dynamics of domestic violence. Six months later, Ranson still says he did not get to finish his answers and gets upset at

Judge Stephens for not allowing him to fully answer the question. Ordering a disabled child with Autism and Neuroborreliosis to testify right then and there- at that moment- without accomodations is abusive, unethical, traumatizing and illegal! Judge Stevens violated the Americans with Disabilities Act when she failed to provide ADA accommodations for Ranson’s disabilities which would have allowed:

My son, Ranson has processing delays due to the Autism. He also has Alexithymia which is characterized by difficulties in identifying, describing and processing his own feelings and circumstances.

Ranson would have been entitled to an repeated explanation of what was being asked of him and why.

Ranson would have been allowed ask questions. Then have extra time to process the answers, so he is able to provide complete answers for the testimony.

Ranson would NOT have had to testify in front of Llovera, the man who repeatedly traumatized him, broke down his front door and repeatedly hurt his mother. Judge Stephens did not provide my son: Per Florida Law, a mandated that a hearing be held to determine any minor’s testimony in a Florida court. This hearing would have allowed Ranson’s service providers input such as his Pragmatics therapist who would explain how Ranson’s Autism is a good reason for him NOT to testify and the additional trauma that comes with forcing him to testify in front of and benefit Llovera-a violent alcoholic, addict, homosexual that refused to accept we no longer wanted him in our lives.

Three days, prior to the Injunction Hearing a PBC jury found Rafael Llovera guilty of battery/domestic for assaulting me in my home and trespassing for kicking our front door in Judge Barry Cohen’s courtroom. Ranson read his victim impact statement to Judge Cohen. My son was told he was the first child to ever read their impact statement in a Felony Domestic violence case. Judge Cohen’s ordered Llovera to stay away from my family: my parents, my child & myself.

Judge Stephens then recused Judge Cohen’s order that stated Llovera as part of his sentence was ordered to stay away from my family: my parents, my son and I. Judge Cohen did not force my son to testify during the trial, but allowed his testimony during the sentencing phase, where Judge Cohen listened compassionately to my Ranson’s victim impact statement. See pics for his stateiment. 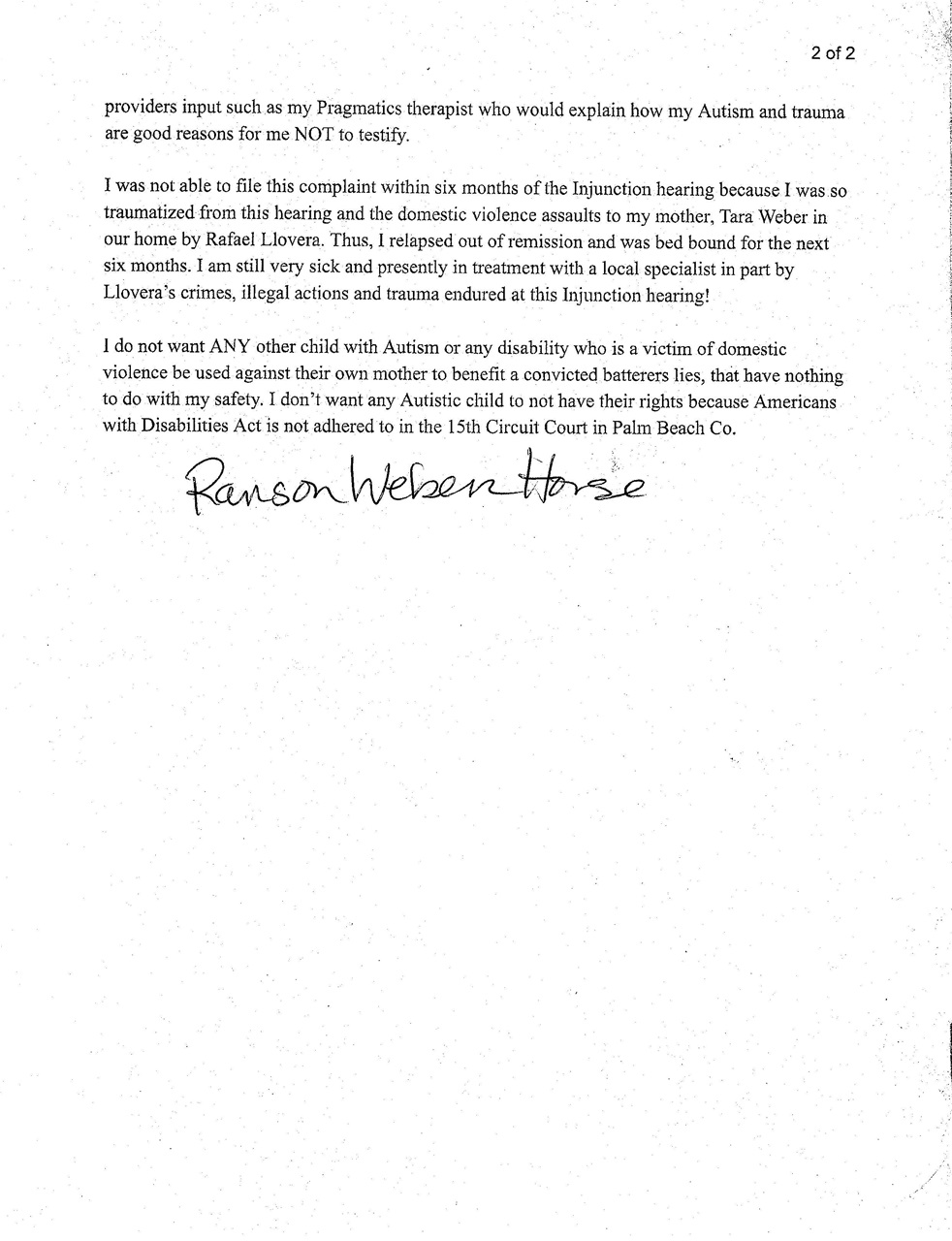 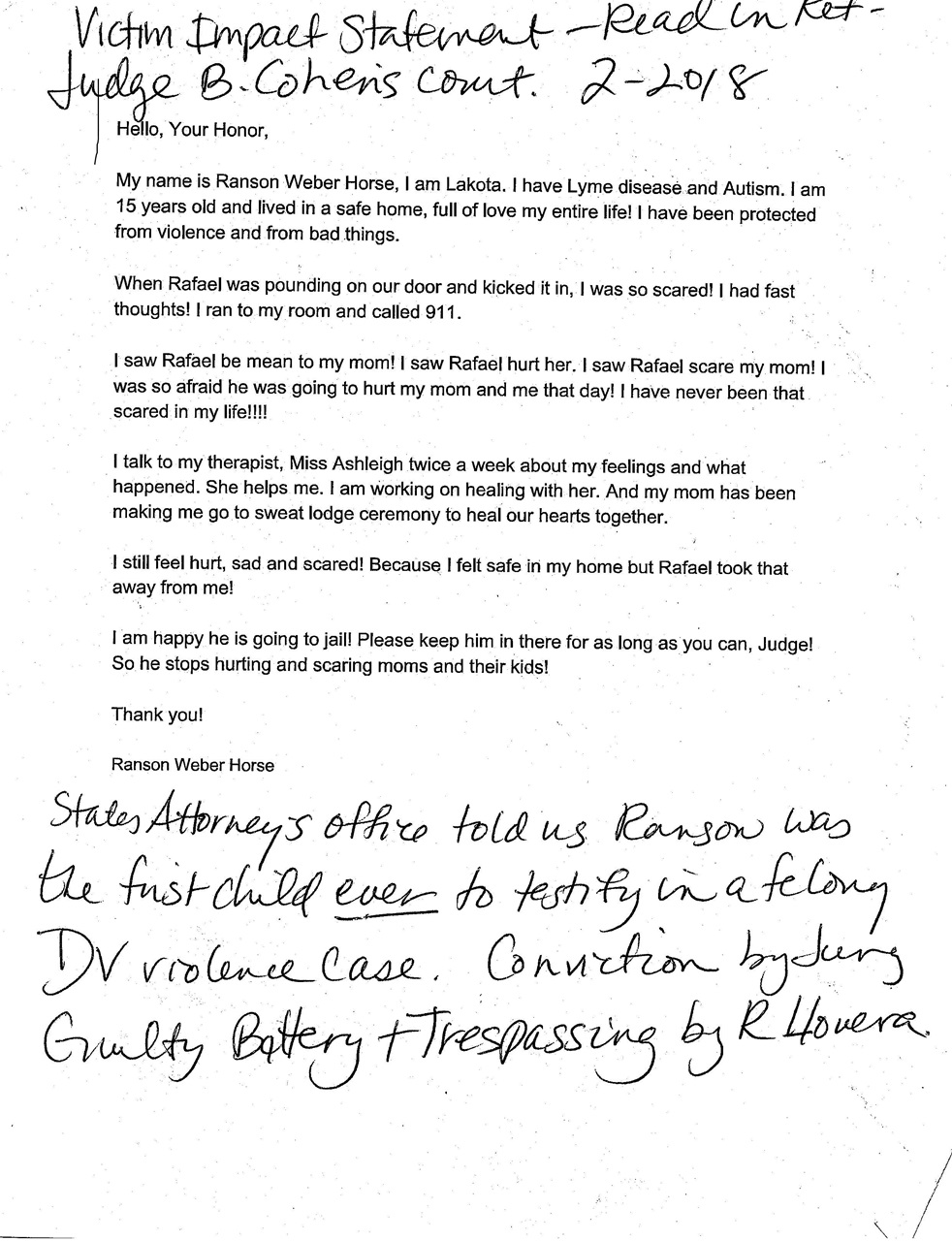 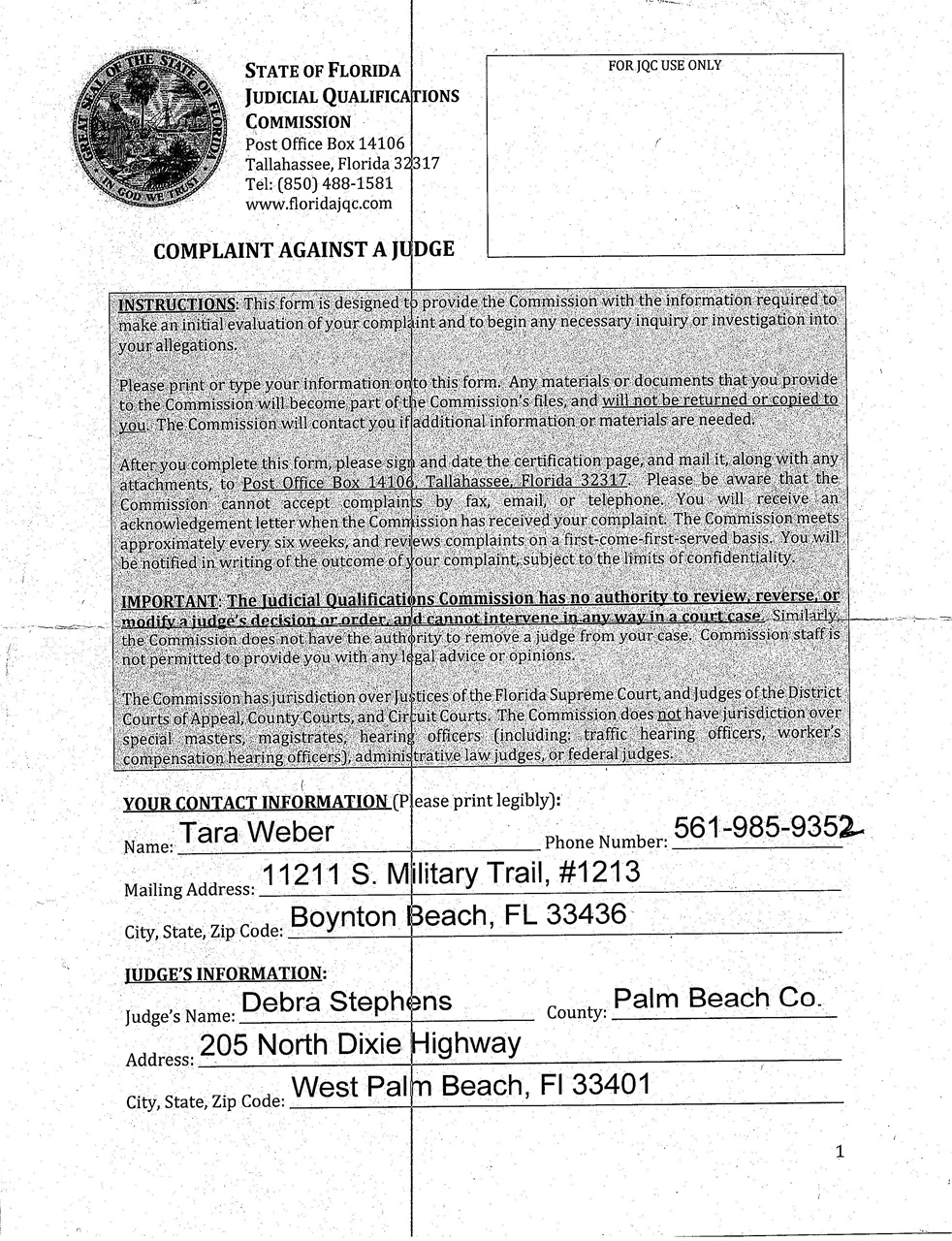 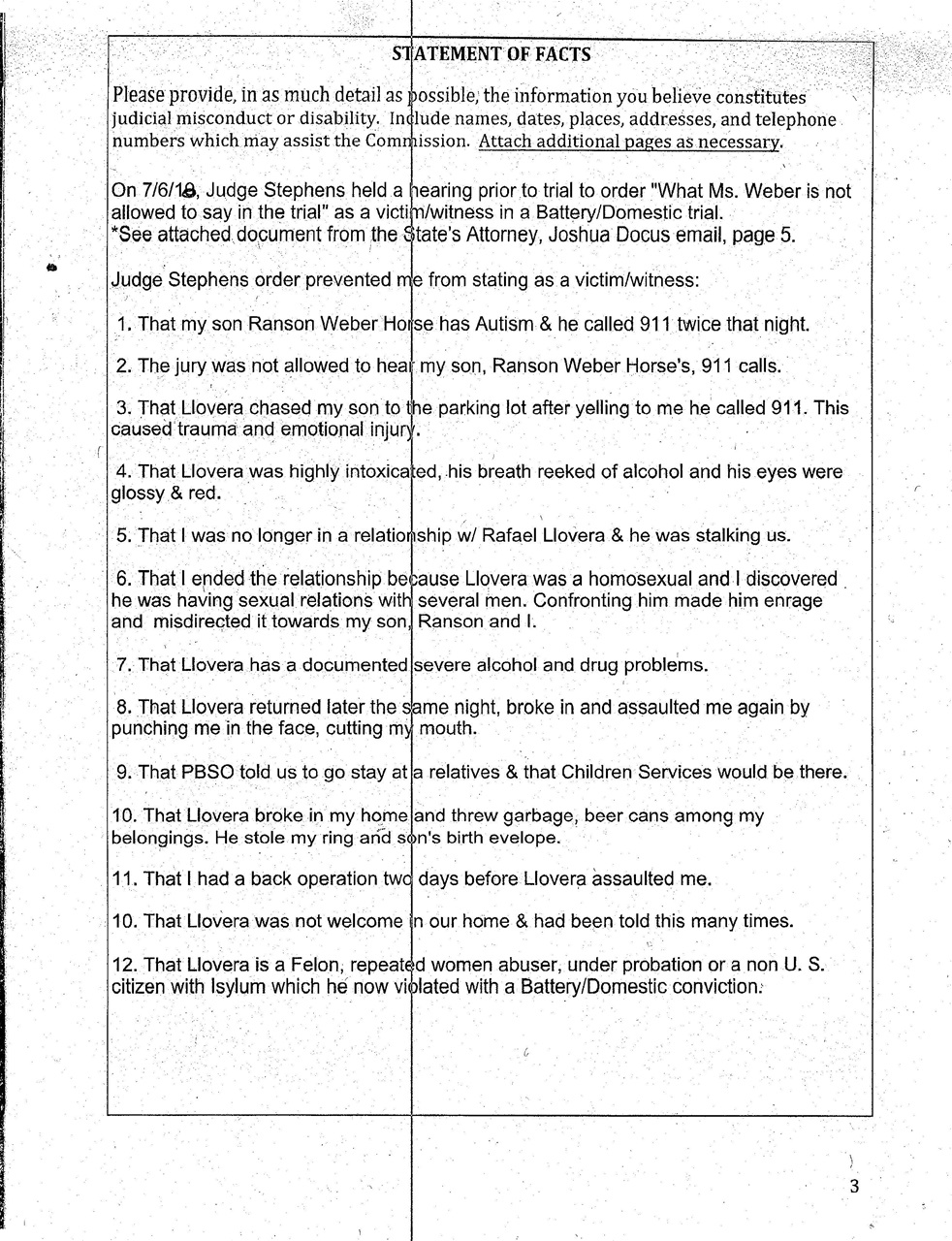 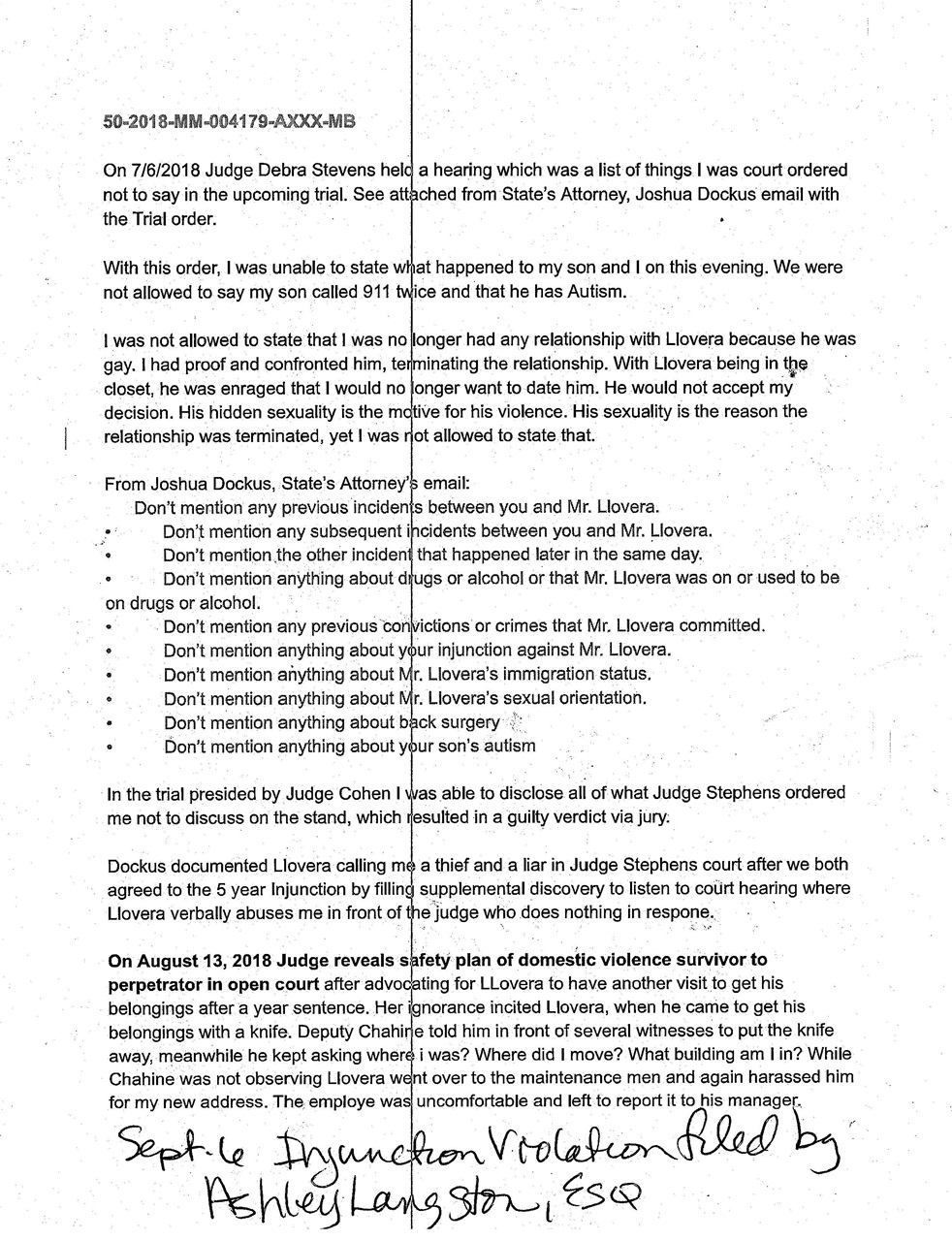 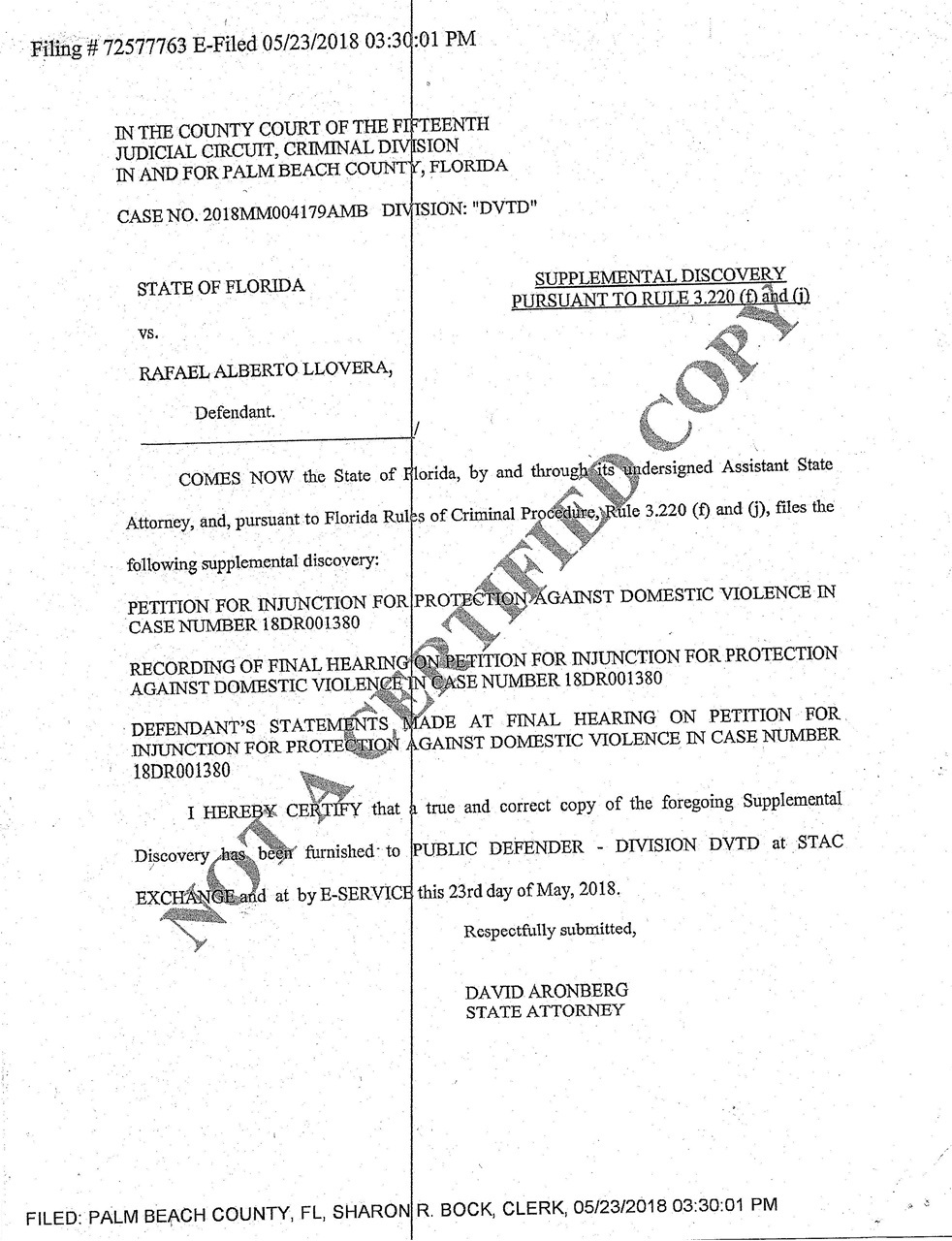 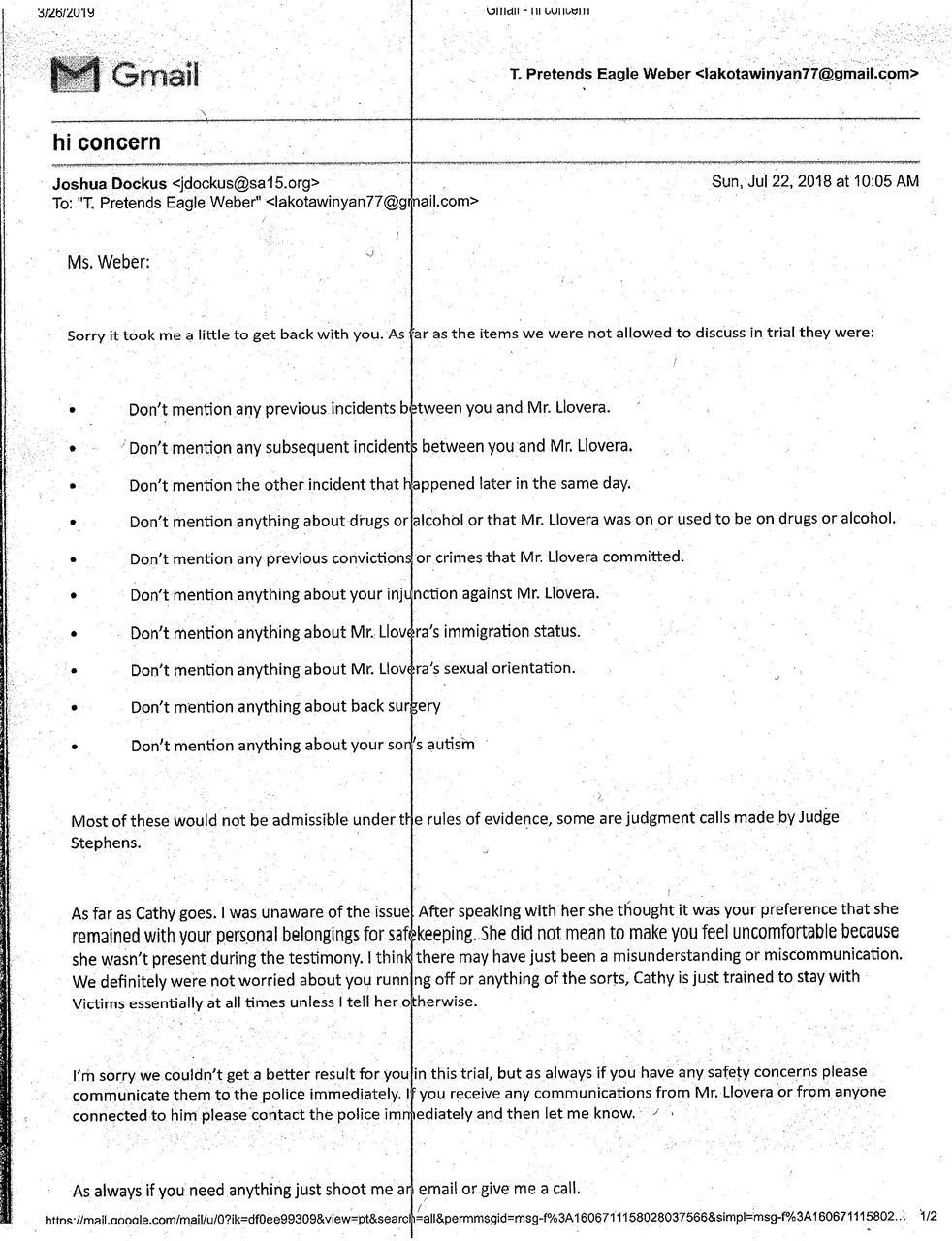 #3 COMPLAINT-JUDGE DEBRA STEPHENS FOR REFUSING VICTIM OF DOMESTIC VIOLENCE TO GIVE HER FULL TESTIMONY!

On 7/6/2018 Judge Debra Stevens held a hearing which was a list of things I was court ordered not to say in the upcoming trial. See attached from State’s Attorney, Joshua Dockus email with the Trial order

With this order, I was unable to state what happened to my son and I on this evening. We were not allowed to say my son called 911 twice and that he has Autism

I was not allowed to state that I was no longer had any relationship with Llovera because he was gay. I had proof and confronted him, terminating the relationship. With Llovera being in the closet, he was enraged that I would no longer want to date him. He would not accept my decision. His hidden sexuality is the motive for his violence. His sexuality is the reason the relationship was terminated, yet I was not allowed to state that.

From Joshua Dockus, State’s Attorney’s email: JUDGE STEPEHEN ORDERED IN TRIAL: WHAT I COULD NOT STAY IN A HEARING BEFORE THE TRIAL. PERP WAS NOT TOLD WHAT HE COULD NOT SAY. EVEN IF HE DID SHE WOULD NOT VIOLATE HIM.

Don’t mention any previous incidents between you and Mr. Llovera.

• Don’t mention any subsequent incidents between you and Mr. Llovera.

• Don’t mention the other incident that happened later in the same day.

• Don’t mention anything about your injunction against Mr. Llovera.

• Don’t mention anything about back surgery

I was able to disclose all of what Judge Stephens ordered me not to discuss on the stand IN JUDGE BARRY COHEN'S COURT ROOM which resulted in a guilty verdict via jury. In a trial later, presided by Judge Stevens, State’s Attorney, Joshua Dockus submitted supplemental discovery which included recording from this hearing & transcribed statements of LLovera calling me names in Stevens courtroom after she issued the Injunction but failed to violate him.

Dockus documented Llovera calling me a thief and a liar in Judge Stephens court after we both agreed to the 5 year Injunction by filling supplemental discovery to listen to court hearing where Llovera verbally abuses me in front of the judge who does nothing in respone. LLOVERA VIOLATED THE ORDER INFRONT OF STEPHENS BY CALLING ME NAMES WHICH SHE ALLOWED AND DID NOT VIOLATE HIM! 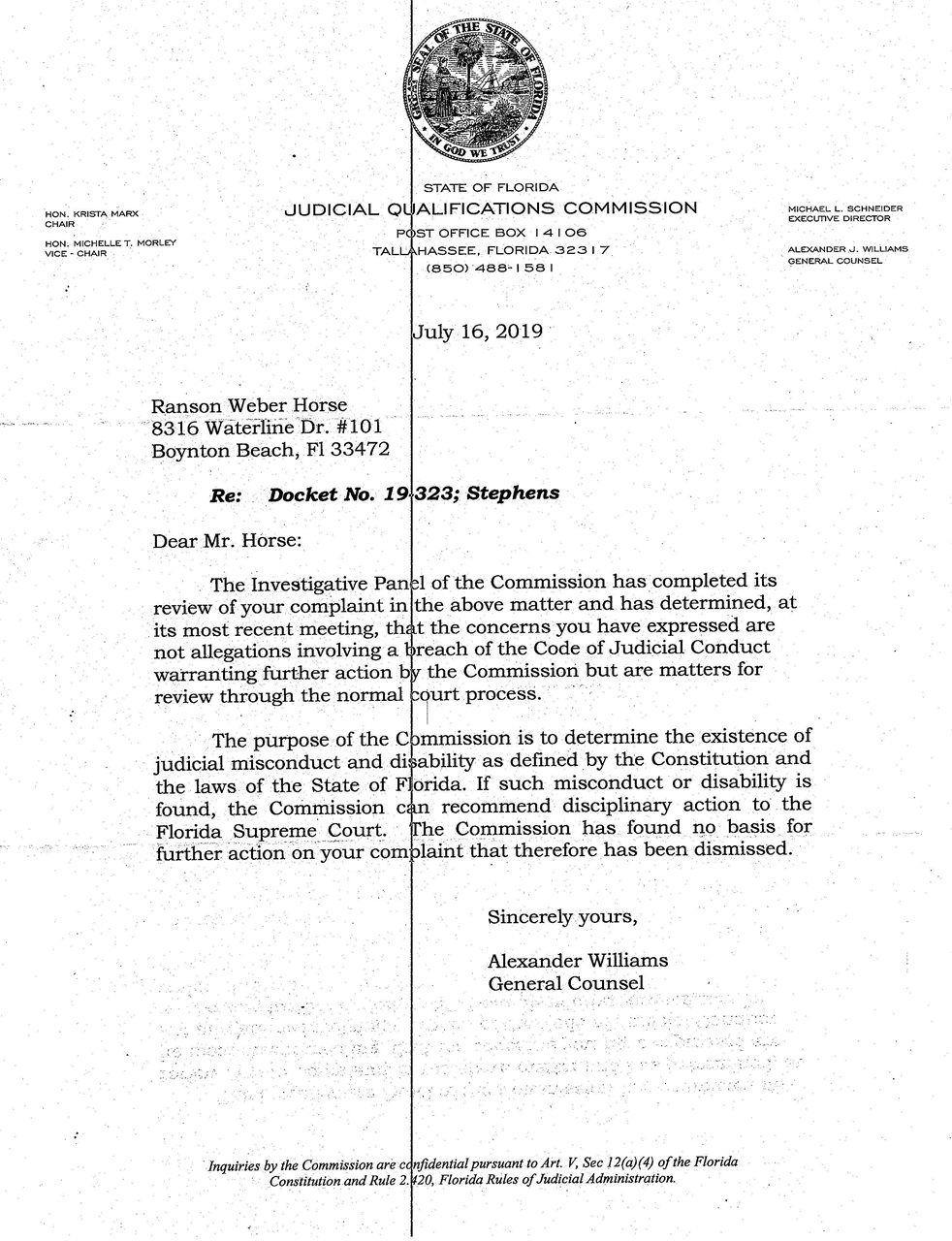 #4 COMPLAINT FILED VS JUDGE DEBRA STEPHENS-VIOLATED MY US CONSTITUTIONS RIGHT TO SAFTEY!

Judge Debra Stephens disclosed our safety plan to convicted repeat violent offender, Rafael Llovera in open court. After she was told in a side bar with white noise by prosecuter Ettie Feistman, we were moving and need time because Stephens was releaseiang him the next day...Despite him pleading guilty that day to 5 additional charges of violating a no contact order, she gave him no additonal time.

As Llovera had just served 10 months for kicking in our door and assaulting me. He was so intoxicated he was passed out our home and after the assault he had to be shot twice with rubber bullets by Palm Beach Sheriff Office!

Llovera is a FELON, REPEAT BATTERER OF WOMEN, 3 DUI'S & A SLEW OF PROTECTION ORDERS AGAINST WOMEN! HE IS AN ILLEGAL ALIEN! 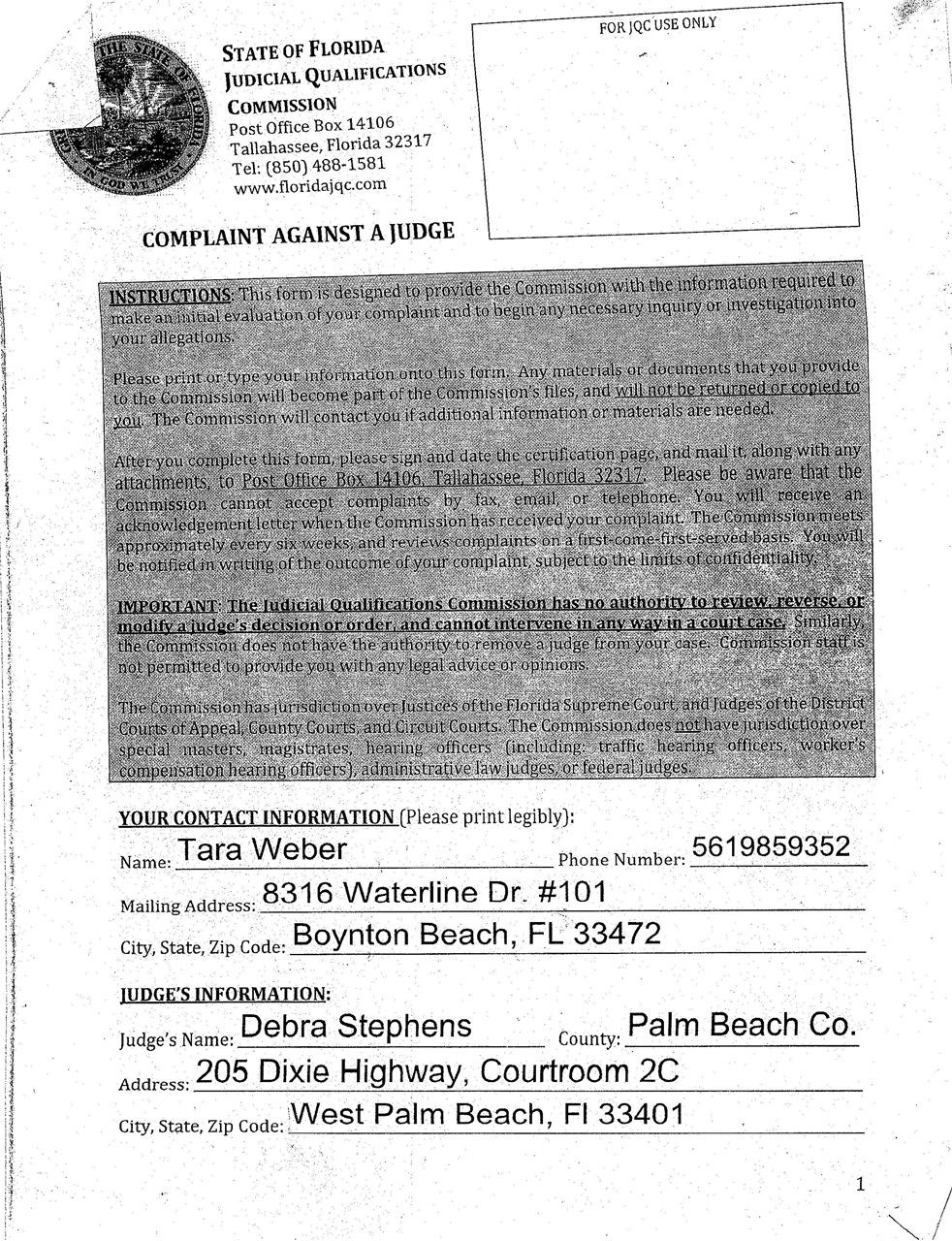 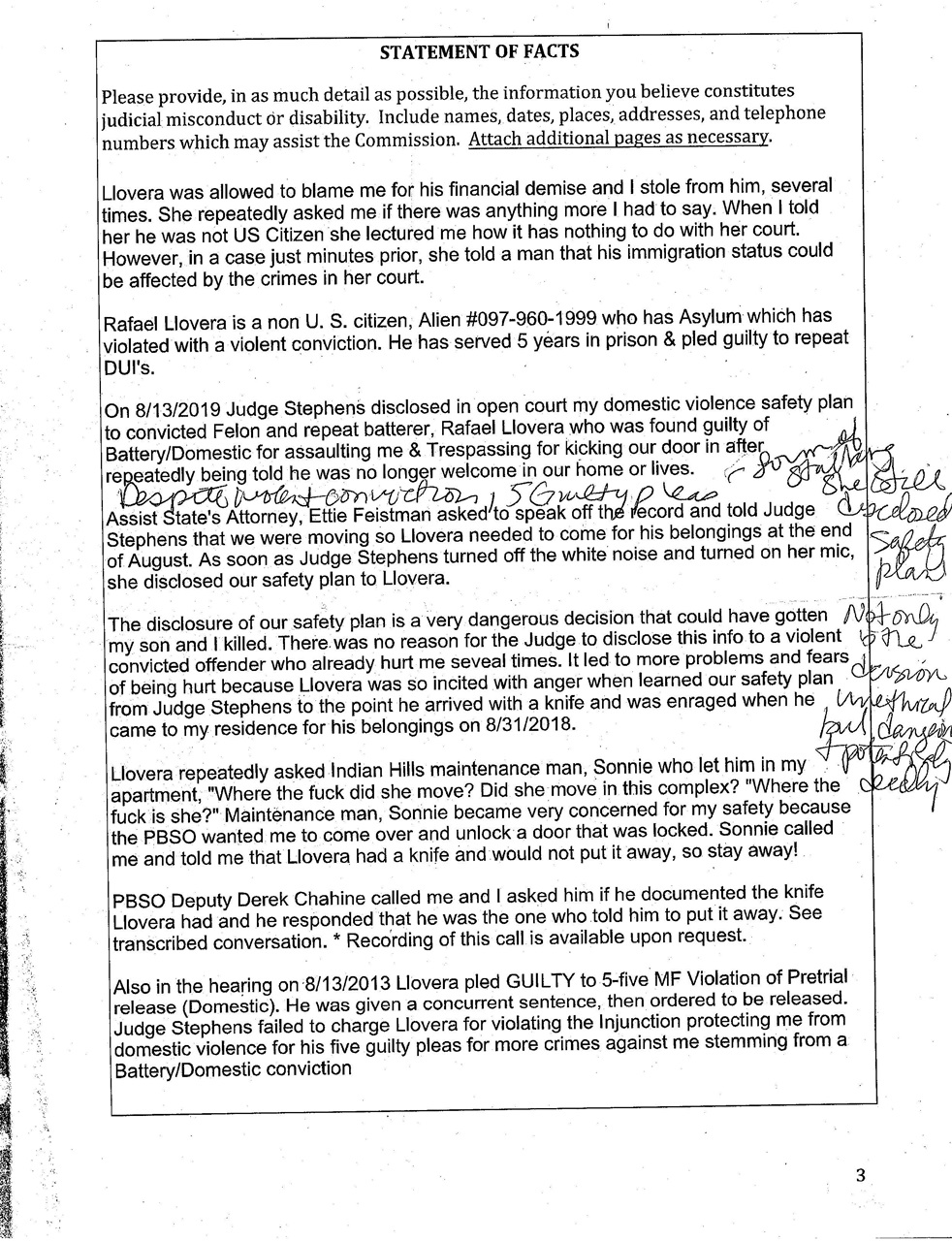 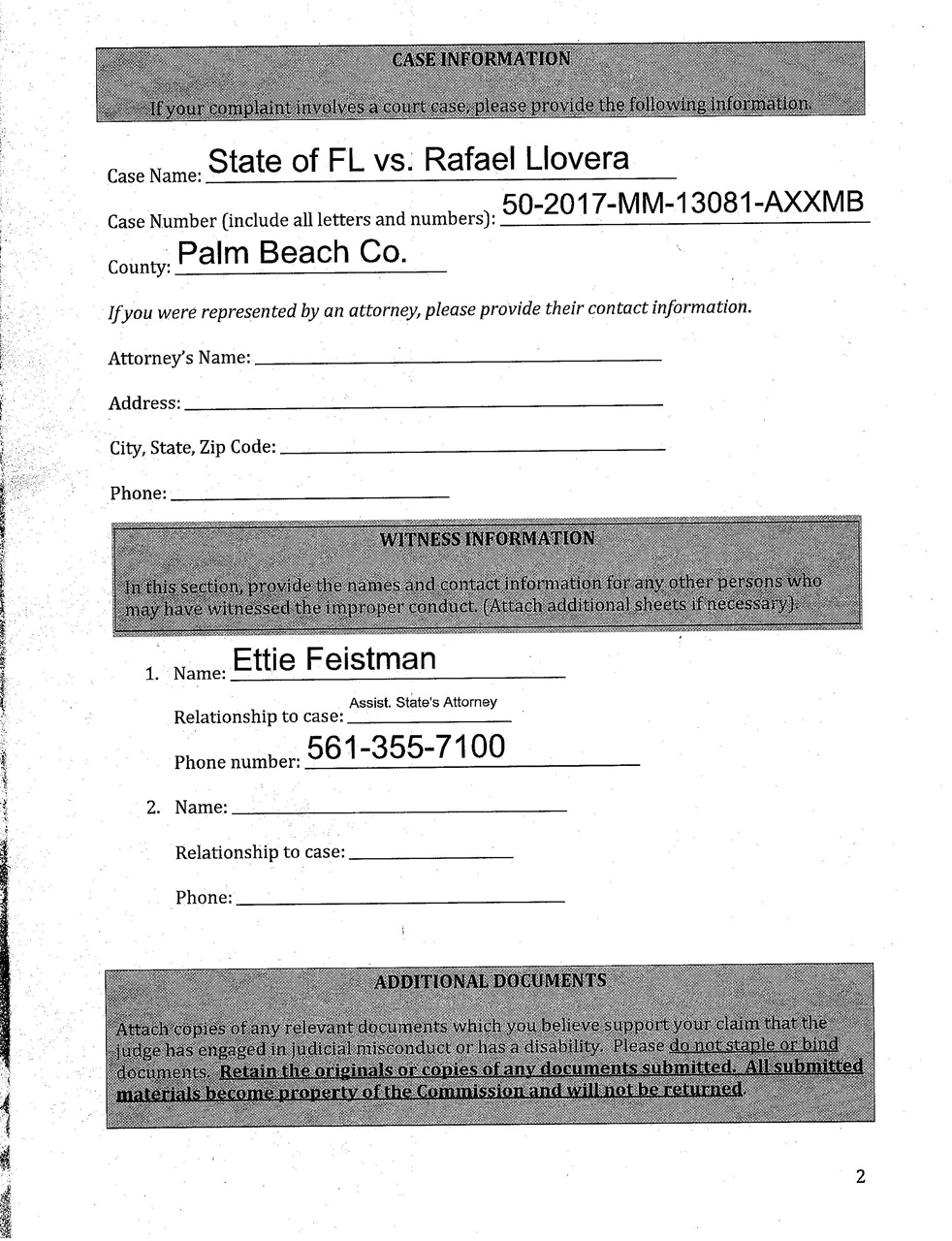